A Day In The Life of a Community Rheumatologist

Today, they explore the exciting field of rheumatology with Dr. Mohammad Ursani, a triple board-certified rheumatologist, author, ACR committee member, and researcher. He has been practicing for three years now talking about his journey to rheumatology.

For more podcast resources to help you along your journey to medical school and beyond, check out Meded Media. If you’d like to learn more about the specialty Rheumatology, check out the American College of Rheumatology.

Then when Mohammad got exposed to rheumatology in residency, he fell in love with it. He realized it was within that same realm of molecular biology as well as immunology, targeting, and modifying cellular response and things like that.

The lifestyle and the disease processes jumpstarted Mohammad into looking at Rheumatology as opposed to hematology oncology.

He knew he didn’t want to do surgery and he never liked going to anatomy lab in terms of dissecting nerves and muscles and memorizing things. He thought it was a little bit more just straight verbatim memorization. Instead, he likes physiology because it just made sense to him. He could predict a response if he tried to understand the pathway and why things were happening.

[03:37] Traits that Lead to Becoming a Good Rheumatologist

Interestingly, there’s a huge gray zone with every pathology and with every case in rheumatology which can also be frustrating. Therefore, you have to have an inquisitive personality.

“You always have to be thinking outside the box as opposed to just being confined inside the box.”Click To Tweet

[04:46] The Biggest Myth or Misconception Around Rheumatology

From an insurance perspective, a lot of people think one test will diagnose one condition. And undoing that mentality or thought process that patients have is very difficult.

The second thing is in terms of medical students and residents. A lot of the stigma on rheumatologic conditions has to do with people. And since they are chronic conditions, people feel like they never get better. They feel like these are debilitating conditions and people have a poor quality of life. Especially in this day and age, it’s not true because there are so many different conditions that have different treatments and people can live a relatively normal or good quality of life.

“A lot of people think one test will diagnose one condition. And undoing that mentality or thought process that patients have is very difficult.”Click To Tweet

He will see people that walk in with bread and butter rheumatoid arthritis. Generally, their complaints are prolonged stiffness, prolonged joint pain, maybe a little bit of swelling that’s usually unresponsive to conservative treatments such as acetaminophen or non steroidal drugs.

“Generally, the patients are much younger as compared to the more typical osteoarthritis patient that’s in the 60s or 70s.”Click To Tweet

Then on the other end of the spectrum, you have people that have a condition characterized by an inflammatory response and overproduction of plasma cells. And it’s to a point where there is no ICD-10 code for it.

So it’s very difficult to get some of these therapies approved. Because if it’s so rare that it doesn’t have the ICD-10 code, then you have to kind of jump through hoops to actually treat these conditions.

All those being said, you have to have your ears perked up a little bit to make sure that you’re not missing anything. You have to always think outside the box before something becomes misdiagnosed or undiagnosed.

His clinic hours start at 8:30. And usually the last deployment slot is around four o’clock. He also takes inpatient consults, so most of the time he tries to do that before the clinic starts. So he starts rounding around 7:45 at hospitals quite close to his clinic.

Then he sees about 20 to 25 patients a day in the clinic and usually gets back home in time before the evening. It’s not too terrible at all. He would usually have a follow up slot between 15 to 20 minutes, and then a new patient is about 30 minutes or so.

[10:38] Taking Calls and Life Outside of Hospital

“Luckily, one of the good things about rheumatology is that there's very little, if no overnight emergencies.”Click To Tweet

Mostly it’s an outpatient branch of medicine. If there are inpatient consults, they’ll call them over the weekend. But it’s pretty reasonable.

Mohammad says he has life outside of the hospital as he gets to travel often, spend a lot of time with family, and still be able to do his hobbies.

There are sometimes academic fellowships where you want to go into a specific study of vasculitis per se. There are additional fellowships that you can do, which are research-based. They’re at certain institutions where there are another year or two years to jumpstart your career in academic medicine or research.

A lot of his decision to choose the community setting was influenced by the amount of student loan burden he had. He loved academics, but he wanted to prioritize paying off his student loans. Comparing the reimbursement or the salary from academics to some of the community offers he was getting, it was practically a one-sided offer due to the big difference.

There are other great options like public service loan forgiveness, which he wished he knew about. If that’s something you’re interested in, you could definitely start the process early. So by the time you finish residency and fellowship, you could knock out a lot of that 10-year period just within your training.

Unfortunately, he didn’t get on that bandwagon early enough into his career just because he wasn’t aware of it.

Traditionally, it was not as competitive as some of the other specialties like cardiology, GI, and pulmonary. But if you look at the trends over the last three or four years, it’s actually been a lot more competitive. There are a lot more applicants. The reason being is because the programs aren’t that big. There are not as many slots that would be in other fellowship programs.

“A lot of these conditions are starting to become more mainstream.”Click To Tweet

Mohammad wished he knew how much of a role insurance companies play and and what a prior authorization was.

Having no training in that whatsoever, whether it’s medical school or residency or fellowship, he really thinks they should be training students and trainees. Or at least give them the low back exposure in terms of what insurance companies are and how they run before you just step out into practice and are expected to know all this on your own.

“Three or four of the top 10 most expensive medications that came out for 2020 were rheumatologic medications.”Click To Tweet

Being high costs or high dollar drugs, there’s a lot of barriers to having them approved and being able to use them. So the patients are the ones caught in the middle of this whole process. Then they blame you because they think you’re the one getting all the money.

Steroid responsiveness does not mean that someone has something inflammatory. But that’s not always the case.

The second thing is about ordering tests. Just because someone has fatigue and someone in their 20s and 30s, shouldn’t warrant you to do a rheumatologic workup. They should really have more symptoms aside from just really big fatigue and hair loss or something like that.

“Be more aware of what the blood tests are and what they mean.”Click To Tweet

Ultimately, be a little bit more aware of what different conditions present them would be very helpful prior to sending somebody to a rheumatologist for workup.

[18:02] Other Specialties They Work Closely With

The fun thing about rheumatology is that there’s a huge overlap with everything because all of their conditions are systemic. So they can theoretically involve any part of the body.

So he’s working with dermatologists, pulmonologist, nephrologist, and even often, ophthalmologists for things like uveitis, or sclerosis.

“It's a good specialty to build relationships with, especially if you're in the community.”Click To Tweet

A lot of the symptoms that people might require, for example, bronchoscopy to be done or, skin biopsy to be done or renal biopsy. So that’s one of the things he really likes about rheumatologist is that it’s truly a multi specialty approach. It’s not just one organ focus.

What he likes most about the field is the disease processes. They don’t know a lot about why autoimmunity occurs. So it encourages you to keep up to date with what’s going on in terms of literature and research.

You need to know that patients that had the same condition may not present the same way. For example, someone has the bread and butter version of rheumatoid arthritis. If someone says they have joint pain.

“The wide spectrum of the conditions and different presentations that people have keeps everything so interesting.”Click To Tweet

There’s also the satisfaction of being able to treat a lot of these people with these conditions that are known to be very debilitating in nature. In this day and age, being able to marry someone or having them, going out and playing with their kids or having them being able to get back to playing sports that they used to play. It’s a really satisfying feeling.

Conversely, what he likes the least is doing all the paperwork, especially with getting things approved and working with insurance companies to have medications approved.

Right now, there’s no known reason why some people respond to certain therapies and some people don’t. And why some people’s disease process is triggered by a certain pathway versus others is a different pathway.

Hopefully, there will come a time when they scan someone at baseline and be able to distinguish which pathway drives their rheumatoid arthritis. So they’re able to give you medication to block that pathway as opposed to cycling through different products and seeing what sticks.

If you want to get more exposure to it, the elective is very short. A lot of times it’s like two to four weeks. So try to request an increased exposure through your program director or your program in general.

“Just see if it's possible to have a little bit more of a lengthy rotation because there's no way that you can get a feel of what rheumatology is in two weeks or four weeks at a time.”Click To Tweet 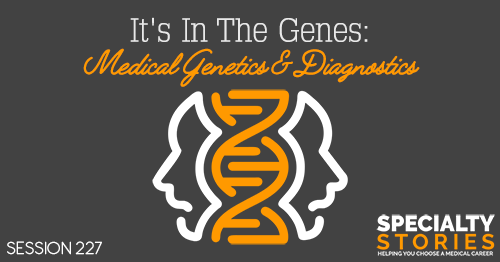