Should you mention your history with mental health issues in your medical school application? Plus, what issues often affect disadvantaged students and URMs?

Our episodes are recorded live on Facebook at 3pm ET on most weekdays. Like the page to be notified.

For more help on your medical school application, check out The Premed Years Podcast.

A: This is a very tough question. But this is something I talk a lot about because it’s always something that is top of mind for students who have struggled with mental health.

If students are taking longer to graduate medical school, that’s typically something they have to report for accreditation purposes. They don’t like reporting stuff to the accreditation bodies.

Medical schools are looking at GPA, MCAT score, and the rest of the application to see if the student is going to do well in their school. And if you have a history of any mental health struggles and you have a demonstrated issue because of the mental health struggles that you have, this is going to start to raise some red flags for medical schools.

By demonstrated issues, meaning, they’re going to look at whether you had to take time off of undergrad. Did you fail out of a semester? Did you have to withdraw a semester or take a year off or whatever that journey looks like?

If you have an academic record, that’s stellar. If you didn’t miss any classes and did well in undergrad and did well on the MCAT. And then you have depression or have bipolar, but your academic history says, you’re doing okay, it’s probably not going to be an issue.

“At the end of the day, you don't want to give the admissions committee an easy reason to potentially just look at your application, and then they don't want to deal with it.”Click To Tweet

[02:52] Should You Discuss Your Mental Health Issues?

There is a huge stigma in our society around mental health. And you would hope it’d be less in medical school admissions, but we’re all healthcare professionals. We want to take care of people with mental health. At the end of the day, they are still individuals reviewing applications.

“If your mental health condition or whatever you're dealing with is integral to you wanting to be a physician, then you need to tell your story and it probably needs to be in there.” Click To Tweet

Maybe you won’t have to focus on it 1,000% because the point of the application is really about why you want to be a doctor. If part of that reason of why you want to be a doctor is because of your mental health struggles, go for it. But also need to understand that it could be a red flag for some medical schools. They may not look at the application because of that, which stinks. But that’s just the way it is.

[04:11] Discussing Breaks in Your Education Due to Mental Health Issues

Q: Is it best for students who have taken time off to not disclose that about their mental health?

A: In the primary application, there really isn’t any specific place for disclosing time off. Where a lot of time off comes from, in terms of answering that question, is in secondary essays. A lot of schools will ask if you had any breaks in your education, and that’s where you can talk about those breaks in your education. Now, it is completely individual. You may have had multiple breaks. Someone else may have had just one semester to deal with something and so on.

At the end of the day, try to put yourself in the shoes of the admissions committee. If you’ve had multiple breaks and multiple issues over the period of your undergrad career, you will likely need breaks again throughout medical school because medical school is that much harder. Your sleep is going to be less and self-care is going to be less. And that exacerbates mental health issues. So a person reading that will probably assume that you’re going to need a lot of extra help in medical school.

“That's not to say that you need to avoid being who you are. But just understand the potential consequences of talking about that.”Click To Tweet

If you can potentially frame it in a different way, then you can try that. But if you just really want to be you and you want schools to accept and support you, that’s another potential argument for why you should disclose.

If you’re going to apply to 20 schools and you disclose your mental health struggles and taking time off, and there are five schools that are okay with it, then great. You can be who you are in those schools. And you can step forward and be honest and go ask for help.

On the contrary, some students who may avoid putting stuff on an application may be scared to go seek help. And so students suffer in silence, which isn’t good either.

Q: Do medical schools offer any type of mental health services? Do they do anything at all to help check on you and just make sure that you, as a student, are okay and to help lift that burden?

A: As you go through this process and you’re looking at schools to apply to, either ask students who go to that school or search anywhere online where you can find students at those schools. Ask them if they have resources for mental health stress, or testing anxiety, or whatever. A lot of schools will have that in place because they know that they need it.

'Most schools will have resources for student wellness to help students through that process.'Click To Tweet

Q: How do you think medical schools view being LGBT?

A: It’s something that that is just looked at separately. A lot of schools may look at it at some secondary essays. They may ask if you identify as part of the LGBT community. And it’s a simple yes, no, or essay type response. Schools will use that to add diversity to their class.

It’s a very med school-specific thing to determine how they potentially ask those questions, and how they weigh that into a diversity conversation.

'Who you are as a student in totality will determine your ability to get in or not.'Click To Tweet

It’s just another part of the application. It’s another part of who you are as a student. Medical schools are going to look at all the applications holistically. And a lot of students roll their eyes with that word. Holistically doesn’t mean they’re not looking at your scores. But it means that if you have shown yourself academically capable of succeeding in medical school, they’re going to look at your whole application to determine who you are.

Again, it’s not about being LGBT or whether you have mental health issues. It’s just part of your story and the whole application.

[11:30] Going Against Religion or Personal Beliefs

Everyone’s an individual. We all have our own beliefs and our own thoughts about religion and the LGBT community and everything else. Unfortunately, not everyone is open, progressive, and accepting of everyone. And that’s their own issue to deal with.

That being said, there’s no need to disclose with medical schools to say it’s against their religion so they wouldn’t want to care for this type of patient.

Q: What do you recommend for students who can’t afford to fly out for interviews?

A: You need to understand that the application process is expensive – from the primary applications to the secondary applications, to having a suit to wear for the interviews, to actually flying and staying in a hotel, food, and everything – while you’re traveling.

“If you're in a situation where you can't afford to fly, then you probably shouldn't apply.”Click To Tweet

Check out the Medical School Applications Cost Estimator and use it to estimate the costs of applying. You just need to budget and save as much as you can before you apply.

The worst thing that you can do is apply to medical school, drain all of your funds, and when it comes to getting an interview going, you can’t go. That just shows them that you probably didn’t plan very well. And that shows a part of who you are.

I don’t see interviews changing because humans need to have someone sit in front of them. Although data shows that’s not necessarily true to be able to get to know someone and have that interaction. But that’s just the way it’s been and it’s probably going to be that way for a long time.

Moreover, there is a benefit to going to the schools and seeing the school and seeing the culture and talking to students and looking at facilities. I personally think an in-person interaction is always the best.

I’m not saying the interview process typically is the best to do in-person. In fact, there are a lot of issues with in-person interviews and the MMI, hopefully, is fixing some of that. That being said, Skype interviews for a lot of people would definitely be beneficial. It would help overcome a lot of the financial barriers for disadvantaged students. 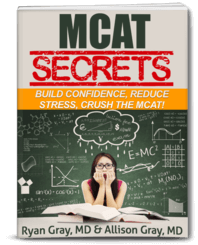 Crush the MCAT with our
MCAT Secrets eBook Which Activities Should I Emphasize on My Med School App?