A 15-year-old boy has a history of torturing and killing animals. He has also exhibited violent behavior towards other students at school. What’s his diagnosis?

As always, we’re joined by Dr. Mike Natter from BoardVitals. If you are looking for some more help with your board prep, check out everything they have to offer. Their massive QBank database will help you prepare for Step 1 or Level 1, and even in the future as well for your Shelf exams. Use the promo code BOARDROUNDS to save 15% off.

Check out all our podcasts for more medical school application resources on Meded Media. Finally, be sure to follow us on Instagram @mike.natter and @medicalschoolhq.

If you haven’t yet as well, be sure to listen to The Premed Years episode 373 where we had Mike talk about his journey from art school to med school.

A 15-year-old boy is brought to the psychiatrist by his parents. While they’re away, the boy placed their pet dog in the microwave and then the freezer eventually trampling her to death.

This is the second incident that the parents know of in which he tortured and killed an animal. When he was 10 years old, he was caught trying to set fire to his school. He has exhibited violent behavior towards other students at school many times.

Which of the following is the most likely diagnosis?

[04:56] Thought Process Behind the Correct Answer

The correct answer here is B. conduct disorder. This is actually a really tricky question because the labels end up being important because they kind of predict future behavior as adults.

Conduct disorder can be diagnosed in children and adolescents under the age of 12 who have at least a 12 month history of violating the rights of others. This also includes violating social norms, aggression towards other people or animals, deceit, property destruction, truancy and other rule violations.

Now someone with conduct disorder probably also has elements of some of these others. They were really kind of harping the cruelty to animals, the fire setting and those are what are prominent. And they also mentioned that this has been going on for at least a year, if not more.

Oppositional defiant disorder is one where you just ignore everything your parents tell you to do and you just will not get along and listen and behave in that way.

A borderline personality disorder are the folks that are going to be splitting. They don’t necessarily or very rarely are going to be putting animals in the freezer and the microwave. It’s more a matter of inward direction of their symptoms. They dissociate. They have suicidal tendencies and they have fear of rejection. But not typically these outbursts of violence and so on.

BoardVitals (Use the promo code BOARDROUNDS to save 15% off.)

The Premed Years 373: From Art School to Med School 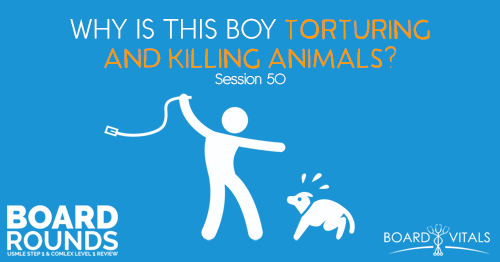